One of the unexpected side effects of the Covid pandemic has been a surge in interest for playing volleyball among youngsters, certainly fuelled in part by a certain Japanese cartoon series.

Credit must go to Volleyball England and in particular to their Competitions Commission for first of all recognising the need for a competitive outlet for both the new comers to the sport as well as catering for the existing players and secondly devising a structure that pretty much addressed the needs of both groups. 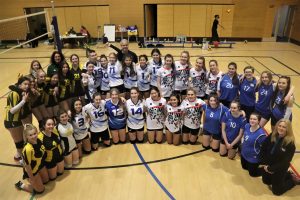 Over 300 junior teams have signed up  for the Grand Prix series which is split into two tiers and played over 3 rounds in the Under 15, 16 and 18 girls and boys competitions. This structure should see teams playing at least a minimum of 9 matches, with Tier 2 events arranged to keep traveling distances down while also playing against a variety of different teams.