Like any sport, and perhaps more so than some, volleyball has to be learned in stages. Not until the athlete is able to control the process of playing the ball to a consistent level –  passing, setting, attacking and blocking – can they really play team-based, competitive volleyball. The Skillz Weekend Camp takes the younger player still learning their ball-handling skills to the point where they are prepared to begin true competitive ball.

Most of the curriculum of this camp is directed toward the individual, although some scrimmaging and small unit training is an integral part of the 10-hour course. Coaches work with each athlete to refine their posture, hand position, platform and movement to the ball in closed-ended drills, i.e. those where the action and its resulting effect on the ball is defined and which the athlete must be able to reach with reasonable consistency.

Even explaining an action can be complicated, one reason why qualified coaching is needed. For example, in the underhand pass, or “dig”, the athlete is taught how to approach the ball, how to position themselves to play the ball properly, how set a stable platform below the waist, and how to use their forearms to strike the ball by adding or absorbing energy to or from its flight, in  order to move the ball within a two-metre distance of the next person who will play the ball.

At these ages, attention spans are still developing, so it is important to give instructions in short bursts, and then once several key skills are revised, the put the athletes into a small group where they can practice with each other. It is not team-based training in its full sense, but it is the very first element of working with teammates. The coached scrimmages introduce athletes to the first elements of tactical awareness, although this does not really become an integral part of training until the athlete begins Performance camps.

But first they have to know how to play the ball and that is what the Skillz Camp is all about. 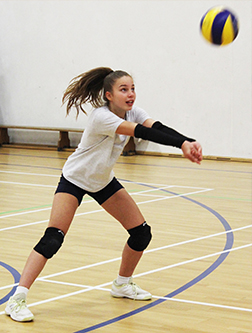